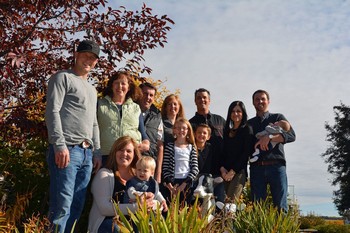 The ninth annual Robert “Whitey” McKown Master Breeder Award will be awarded to
Wendon Holsteins of Innisfail, Alberta, Canada. This honor will be presented at the 51st
World Dairy Expo in Madison, Wis. The prestigious award recognizes a well-managed
breeder and herd that has been successful at showing and judging, and it emphasizes all
qualities of the Klussendorf Award, including ability, character, endeavor, and
sportsmanship.

Established in 1976, Don and Wendy Chalack combined their interests and passions to
form their prestigious herd featuring 65 milking Holsteins and a small herd of purebred
Black Angus on 900 acres just outside of Innisfail. Don and Wendy farm with their son-in-
law Scott Hastie and daughter Jillian and their children, Marshall and Maddyn. Oldest
daughter Linsey and her children, Paige and Nathan, help out when they can, and both
children are involved in 4-H. In July 2016, Don and Wendy’s son, Logan, lost a battle with
cancer and was known for his love of breeding and marketing cows. Fortunately, Logan’s
wife, Charity, and daughter, Chloe, live close by to the family.

Starting with a 50-cow tie stall operation in 1976, the herd recently converted to a 60-
cow free stall robot barn in 2015 with 12 tie stalls for show cows. The original tie stall
barn is now a more efficient and spacious calf barn. The herd is 90 percent homebred with
a classification breakdown of 24 Multiple Excellent, 15 Excellent, 62 Very Good, and six
Good Plus cows. Their current rolling herd average is 27,557 pounds of milk, 4.0 percent
fat, and 3.3 percent protein.

Don served as the Alberta Holstein president in 1989 and 1990 and as a director on the
Alberta Holstein Branch from 1980 to 1992. He was also one of the founders of the
Western Canadian Classic program 33 years ago. In addition, Don joined with a few
neighboring herds in the early 1980s to bring the first show string from western Canada
to World Dairy Expo. Passing on their love for cattle and hard work ethic, their three
children were a part of dairy and beef clubs and the Western Canadian Classic junior
show. Don has judged shows in Canada, the United States, Mexico, and Columbia. Logan
and Linsey also gained their official judge’s status from Holstein Canada.

Their breeding philosophy is based on breeding cows with deep pedigrees and show
type. Wendon Holsteins has bred 55 Star Brood cows (13 of those being greater than 4*),
102 Excellent cows, and 391 Very Good cows. The Wendon prefix has also won numerous
recognitions in the All-Canadian contest with two winners, two Reserves, six Honorable Mentions,
and four more nominations. In addition, they have bred one All-American winner.

With a strong flush program, Wendon Holsteins sells embryos, females, and bulls each
year. They market their high-quality herd through print advertising, a farm website, and
Facebook page. The Chalack family is the epitome of dedication, strength, and a love for
cattle that make them a deserving winner of the McKown Master Breeder Award.

The Robert “Whitey” McKown Master Breeder Award was made possible by the family
and friends of the 1992 Honorary Klussendorf honoree. McKown joined the Holstein
World staff in 1956 and became widely respected as he traveled nationally and
internationally, reporting on shows, sales, meetings, and other Holstein events. The 1987
National Dairy Shrine president also developed MooKown Holsteins in Belleville, N.Y.
McKown had a great admiration for the farmer breeder.